So it's been quite some time since I last posted.  That was not necessarily because I haven't read anything worth writing about, I just took a break to take a crack at writing my own romance novel.  It's coming along but it's a lot harder than it looks!

That being said I couldn't pass up writing about "Love At Last", book number eleven in the Black Dagger Brotherhood series by J.R. Ward.  As most of you who have followed this blog know, the WARDen is my absolute FAVORITE author..........EVER!!!!

The release of "Lover At Last" has been a very highly anticipated book.  The main love interests were introduced 5 books ago and the tension has been building with each new book.  There were some nail biting moments when fans of the series thought that perhaps (considering the subject matter) the WARDen would just opt for a novella or short story but in the end she revealed last year (during the release of "Lover Reborn") that she would in fact being giving these two characters an entire novel and their own HEA.  Thus began a year of bated breathing and mounting excitement until the release on March 26th.

The main characters of the book are introduced in book 6 of the series and the evolution of their relationship has captivated fans ever since.  The steamy close but no cigar (no pun intended) moments, the almost kisses, the one sided confession of love and the internal struggle of one to come to terms with who he really is, created a mountain of tension and pent up frustration that was finally....gloriously....released in "Lover At Last".

Quinn and Blaylock...yes both are male vampires.  Both are great warriors and sexy as hell.  Blay has accepted his homosexuality and has been comfortable with it for several books.  He of course has harbored unrequited love/lustful feelings for his best friend Qhuinn (who by all accounts has man-whoring down to a science....but just can't seem to accept what he feels for Blay).

I for one never thought that reading a romance novel where the main characters were both men would have been so ..... enlightening .... no exhilirating.   I've had many gay friends over the years but it was never something that I ever thought would be interesting to read about (I mean... what character do I picture as me??)  The WARDen though.... she got me!  From the first almost kiss, those initial intense stares and the continuing tension growing between these two incredible males had me drooling more than any of the other books (including Vishous' book and I LOVE Vishous).

I found that in this particular situation it was just as enjoyable to sit back and just watch the characters rather than pretend I was one.  The WARDen does a wonderful job of creating this attachment with these two characters over the course of 5 books that by the time you get to the one meant for them, you don't even remember that they are two male vampires.  They're just two people who have fought, laughed, hurt, and loved together for years.  You WANT them to be happy!

Watching the internal struggle with Qhuinn as he comes to terms with his feelings for Blay and then also seeing how Blay becomes his own man and is able to view Qhuinn as not someone to be placed on a pedestal but rather that he is a hurt and broken male who ultimately is the male he loves more than anything.  We see Blay take on more of a commanding role in this relationship and it makes the ultimate moment of their consummation that much more explosive.  The subsequent erotically charged scenes in the book are just as steamy especially as Blay becomes more and more the alpha in the relationship.

WARDen has taken a subject that is extremely hot and controversial today and made it relateable.  You identify with these two characters.  After all you've been watching them for over 3 years now (chronologically from the books).  You watched them go from young boys into young men into strong deadly fighters.  But you also watched their struggle with wanting someone they can't or don't believe they can have.  Who hasn't experienced this in their life?  The guy in high school you just couldn't get out of your head for four years?  That really hot movie star that you'd give your left arm just to kiss once?  We've all had those feelings and watching Qhuinn and Blay and knowing that what is keeping them from actually getting their HEA is how those around them will view it, makes the happy ending mean something because they were able to get past appearances and be with each other.

J.R Ward handles this subject with humor and sensitivity and gives the topic a very personal bent.  The timing of the release of this book was well placed with the legislation and cases for same-sex marriage.  Qhuinn and Blay show how, you love who you love, and you should be allowed to love who you love and the government shouldn't have any say.  The brothers and the king (Wrath) all accepted their relationship and welcomed them and even helped in creating a very, very romantic ending.  Not only that but the response that Blay receives from his mother and father after coming out to them about his homosexuality was heartwarming and made me think that as a parent that's the way we should react to our children when they tell us about themselves and who they love (whether it be someone of the same sex, a different race or a different religion).

I highly, highly recommend this book!  It's one of the best ones in the series.  So from from one book addict to another....happy reading!! 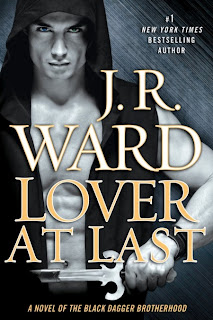 Posted by LRArconati at 11:09 AM No comments: