So I was on Facebook the other morning, and most of the time I just ignore those ads off to the side because half the time they're nothing I'm really interested in.  I realize they are marketed towards my interests but really, when am I EVER going to wear five inch bright green hooker shoes?  Well, this morning was no different, I'm scrolling down my news feed and one of the ads catches my eye.  It's a B&N ad for a five book collection of two different series by author HP Mallory.  So the ad says I can get three books from one series and two books from another series for $2.99.  The two series are Jolie Wilkins and Dulcie O'Neill. Well can't beat five books for three dollars!  Here's hoping they're good, I thought.

The first book I read was from the Jolie Wilkins series.  So the premise is the main character, Jolie Wilkins, is a witch (but of course she doesn't know that yet).  She can see auras and glimpses of the future.  She's introduced to the Underworld (which consists of every supernatural being imaginable; warlocks, vampires, witches, werewolves, demons, faeries) by Rand a very powerful (and naturally extremely hot) warlock.  Jolie has a special gift that all the Underworld beings want...she is the only witch who can bring back the dead.

The book is written in first person and I think I'm starting to like this style of writing.  I used to hate it because I never knew what the other characters were thinking, but it's growing on me.  I was very pleasantly surprised.  The books are well written.  Characters are well developed.  And as most of you know by now, my favorite thing is dialogue, and this has some of the best spoken and inner dialogue I have read in a long time.  Jolie speaks like a 21st century American.  Not always proper English and lots of sarcasm (which is my favorite).

Oh, and Rand?  The HOTTEST warlock ever!  He's English so plus for the accent.  Tall, dark and ripped, and has a way with his mouth.  *sigh*, but he's not the only eye candy in this book.  Jolie (in the vane of Sookie Stackhouse) seems to have every major hunk from the Underworld after her, as well as a few not so pleasant characters.  There's Sinjin the vampire, he's my second favorite.  Also English, but sarcastic, and suggestive...certainly puts Eric Northman to the test.  Then there's Trent, the werewolf.  Although nothing will make me love another werewolf above Alcide, Trent is a werewolf you love to hate.  He's cocky and over confident which creates great banter between him and Jolie.

All in all it is so far a great book series.  There's of course an impending war that they all have to worry about in between trying to get Jolie in bed.  I can't wait to see how it all plays out.  Who she'll end up with ultimately and the outcome of the war.  I highly recommend this book if you're looking for a good series.  I don't know if that special is still available but check out HP Mallory any way for other books.  I know I will!  From one addict to another...happy reading! 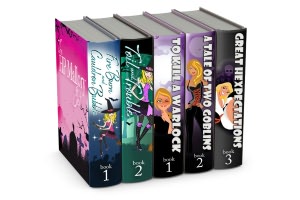 Posted by LRArconati at 9:15 AM