Lover Eternal is the second book in the Black Dagger Brotherhood series.  Although it can be read separate from the other books it's still best if read in order.  So we've learned all about the vampire culture and species.  We've met the king and ultimate queen of the race.  We have also met the other brothers as well as the enemies they face.  As stated before J.R. Ward does an amazing job of getting you interested in the other characters while she's writing the main love story.

In book two we get to know Rhage and Mary.  Rhage is the playboy of the group (not that the other guys are slouchers in bedding the opposite sex).  He's affectionately nicknamed Hollywood by the brothers because of his movie star good looks and smooth moves with the ladies (both human and vampire) and due to some nasty curse by the Scribe Virgin he has to release excess energy through sex of fighting (Butch a human who has been allowed into the group quips when he witnesses the curse first had that he needs to remember never to get between Rhage and a woman again).  Needless to say he goes through women like a black dagger goes through a lesser.  What you learn is that although it seems that Rhage has it made in the sex department, he's lonely and actually jealous of the other brothers who have shellans (that being Tohrment and Wrath at this point).  Naturally his curse doesn't allow him to get to close to someone because he's always afraid he'll inadvertently turn into a dragon and eat the woman (and not in a good way).

As with all of the boys he's HOT!  Well built with blond hair and blue eyes, they describe him as more handsome than Brad Pitt (which isn't that hard to do lately... Brad is not aging that well).  I have to tell you that after seeing Thor, Chris Hemsworth is the spitting image of Rhage!  And he's got the attitude to play him.  So picture that scene in Thor when Chris comes out in just a pair of tight jeans and no shirt and that's pretty much how you can picture Rhage.  But I digress... Rhage is a great asset to the Brotherhood, his ability to wipe out a major group of lessers is often extremely helpful.  So how do we help him through his loneliness and yearning for a shellan?  Simple we bring in the human! 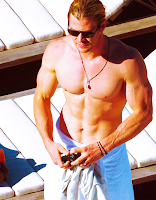 Mary is human.  No vampire DNA anywhere.  She's also dying of cancer.  But her caring heart and extremely insane calmness at being informed not only do vampires and undead human enemies exist, but one of these vampires has decided that he wants her (scars and unimpressive looks and all).  Lucky girl!  She meets Rhage after she befriends a pre-trans vampires (unknown to her and the pre-trans at the time) and thinks she's taking him to meet some martial arts experts.  This is the introduction of John Matthew.  He will get much more involved as the series goes on along with the introduction of his best friends Qhuinn and Blaylock (boy are they a post for another time!)

Of course the romance between Rhage and Mary is fraught with peril and the ever present threat of her dying of the leukemia.  The best thing about this book is it's the funniest of all the books.  Rhage had a great sense of humor and Mary is sarcastic and quick witted.  The inner dialogue is about as quippy as the the banter between Rhage and the other brothers as well as his sexy bedroom talk with Mary.  For a change it's actually Rhage who gets chained up (so for those of you who like be a little more Christian Grey than Ana Steele this should appeal to you), but of course it's for Mary's own safety.  Yeeeeaaaaahhhhh right!  This book also sets up the next book in that it introduces the heroine of that book in the character of Bella.  The way the book ends just pushes you into reading the third book.  The third book is the most intense as far as emotion and back story of the vampire Zsadist.  If you've picked up the series with Wrath and Beth, then keep reading because there are more characters introduced in the next few books as well as development of story lines for future books.  Lover Eternal is a great read by itself but really continues the saga of this group of brothers who are trying to save their race and themselves in the process.

Posted by LRArconati at 1:58 PM