After reading most of the Sherrilyn Kenyon's Dark Hunter series I was looking for another vampire series that would hopefully be just as good as the one I had just finished. The nice thing about the Nook is that when you’re in shopping mode it gives you suggestions of what others who have bought the book you’re looking at have also bought. This was how I discovered J.R. Ward (she has also written books under the name Jessica Bird).

The series that came up first was her Black Dagger Brotherhood series. I thought Black Dagger Brotherhood? It’ll probably be really campy and she can’t possibly write as good as Sherilynn Kenyon does but it seemed to be quite a popular series among those who had read the Dark Hunter series so I took a chance and read the synopsis of the first book…

Dark Lover : The first novel in J.R. Ward’s New York Times bestselling Black Dagger Brotherhood series features a unique take on vampire lore and heavy doses of sensuality. The vampire Darius fears for the life of his half-breed daughter, who is unaware of her unusual destiny. To oversee her transformation, Darius seeks help from Wrath, a dangerous loner and the world’s only purebred vampire. 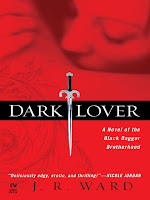 Okaaaaay, I’m game! I purchase the first book and the love affair with these men was instantaneous. The twist on vampires in this book was one that I had never considered. The WARDen (as her fans have affectionately named her) creates this world (Caldwell, New York) where vampires are really a separate species created by a benevolent (albeit a mysterious) creator. They cannot “change” humans into vampires and they are not immortal they just age very, very slowly once they go through their transitions, and they heal rapidly which makes them hard to kill. Much of the same vampire lore is true such as amazing strength, increased senses (particularly the sense of smell), and the inability to process sunlight. The interesting thing here is they don't have this sensitivity until after they go through the "transition" from child to adult at around the age of twenty-five. Until this time they are scrawny, weak, can go out during the day and have no sexual drive whatsoever. But within a twenty-four hour period they go through a transformation that most humans take over five years through their teens to accomplish. As you can see the amount of detail in creating this world is astounding!

The WARDen has a supernatural ability to not only create this entire race (creation story, language, biology, government, social hierarchy, and theology) but weaves them in along side the human race and the reader actually has to remind themselves that this is fiction.

She instantly drags you into this other world and introduces you to some of the most interesting characters you have ever met. Immediately upon opening the first book you get to know Darius and even in the few pages that she uses to introduce him, you find him to be strong, courageous, but most of all a family man who wants nothing more than to unite his brothers and keep his last remaining child (a half-human/half-vampire daughter) alive. She endears you so quickly to these characters that when Darius dies within the first two chapters you're devastated by the loss. I've never grown to care for a character so quickly.

Wrath initially refuses to help Darius with his daughter but with the tragic death of his fellow warrior, Wrath is compelled to see out his friend's last wish (little does he know how she will effect him when they first meet). Wrath is your typical brooding hero type but the WARDen describes him in such a way that you don't feel sorry for him and you don't roll your eyes thinking "God what a whiner"! He does anything and everything to protect Beth but he doesn't keep her from being who she is and allows her strength and skills to flourish. When you meet Beth you find that she is strong and full of spirit and you like her instantly. She doesn't take any of the boys' shit, which is something all of the women who end up with a brother will need to be able to do. The dialogue is very easy to follow and the characters have well developed senses of humor. Each one has their own unique brand of sarcasm that only builds on their personality. 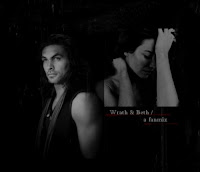 I fell in love with this series because of this first book but there are others in the series that just really solidified this series as being the best I have ever read. The thing about this book is it sets up and depicts most of the other characters who will appear later in the series. Unlike most series where the focus is mainly on the two main love interests, the WARDen expertly weaves tales for several other secondary characters as well as provides you with an insight into the thoughts and plans of the villains. It's these side stories that keep you reading. You know the main characters are going to have their HEA (Happily Ever After) but it's the other stories that keep you hooked. Will there be a book for this or that character and if so what will their story be? After ten books in the series I'm still not tired of them and hope there are many many more to come. For sure there is an eleventh as mentioned in another post... Lover At Last will be out in March of 2013!!! This couple's tale has been anticipated for almost six books now!

For those who might be keeping track... Wrath and Beth do have a song - Without You by Mötley Crüe

Posted by LRArconati at 8:55 PM