How to know if you're good to your fans...

I've written a lot about several different book series that I have read and I've mentioned the Black Dagger Brotherhood many times but haven't actually blogged about it yet.  I'm waiting until I finish my third re-read (which if you know me is somewhat of a ringing endorsement since I don't re-read books often let alone a whole series).  I was thinking about why I love this series so much and then speculating on what makes fans of any celebrity (author, singer, actor) scream with excitement.  One word...RESPONSE!  When an author, actor, singer, politician (you name it) responds to your interest in their work and cares what you think that means something.  Not only is it exciting to think that the person you admire (or drool over) has noticed your tweet, post, email, letter, etc., but it makes that individual seem more real.

With the advent of social media that ability to have that six degrees with celebrities is both a good thing and a bad thing.  Good for those who like and respect their talents and want them to know that their work is appreciated but I can see it being bad what with stalking and crazy people (despite what my husband says I don't stalk I merely admire exuberantly).  That being said, it's the good of social media that can get an unknown author or actor a lot of free publicity if they connect with their fans. Yes meeting celebrities in person is fun but it's usually in an organized, well-ordered event (I once met Rob Thomas at a meet and greet which was fun but I was just one the group... he's was SUPER nice by the way) but it doesn't have the same thrill as knowing that something you just threw out there as a compliment or question was actually read, processed by and responded to by that person.

Although my experiences with responses from the admired elite are not of the unknown variety the fact that these two people saw something I wrote regarding their body of work and were amazing enough to respond to it has raised them to a great level in my estimation of their character and talent.

The first experience with a response from social media was from my favorite author J.R. Ward.  She is the writer of the Black Dagger Brotherhood and Fallen Angels.  I had been posting on her fan Facebook site for a while (and I also might add that this is the best community of fans I've ever seen).  One of my posts was a question regarding timeline in her books.  I merely posted as a question to other readers who might have an answer when to my great surprise one of my responses was from the WARDen herself!!  I was so excited I had to stop my car!  She read my post and took the time to write a response (and an answer to the question).  But it didn't stop there I responded to her response and we kept up a dialogue regarding this question for sometime.

It was the most amazing feeling.  Here was this author whom I really admire and she is interested in my opinion and my thoughts on her work.  I think that was when I decided I would love to write book reviews about the books I've read.  Maybe another author might be interested in what a fan has to say.  I will be posting  more on the BDB book series (probably have whole separate blog for that).  That being said I think this made me appreciate her work more and earned the rank as my favorite author (You feel me?).

My most recent experience with this was last night when I tweeted a link to a YouTube video promotion for the movie Magic Mike (Channing Tatum stripper movie... who could pass up posting a video of that... Premieres June 29, 2012 by the way).  But not only is Channing Tatum in the movie (along with Matthew McConaughey, Matthew Pettyfer,  and Matt Bomer... mmmm) but it also boasts the talents of my unseemly crush and only man who has stayed on my list of five free passes for over two years, Joe Manganiello.  So in my tweet I included Joe in the tweet as a nod to him that I was looking forward to seeing the movie.  I've sent tweets about him and to him before (again admiring exuberantly!) but not really expecting a response as I KNOW he gets thousands if not millions of tweets daily.  Imagine my heart stopping surprise when I checked my email and saw "Joe Manganiello has retweeted one of your tweets" in the subject line.  I nearly had a heart attack.  You'd have thought he had showed up on my doorstep half naked telling me I had my one night shot!  An over-reactive response to a retweet I know but the idea that he had seen MY tweet and took the time to acknowledge that I was the one who tweeted was better than any "meet and greet" where I'm one in a million! Now I'm not saying if he did show up on my door step and said he had my free pass that I'd turn him away but it was still nice to know that for a brief minute he heard me out of all the other thousands.  Oh and it's increased my Twitter following (which will be good for this blog), after his retweet I got like 5 more people to follow me!  So thanks Joe, you are one awesome, bad ass wolf! 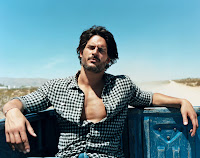 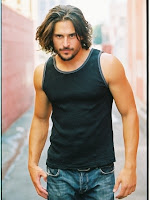 I think perhaps the WARDen should keep this one in mind when building a new character for the Brotherhood or the Angels!  I'd definitely like to see what he could do as a vampire or maybe even a Fallen Angel.  I already know he's killer as a wolf!

Posted by LRArconati at 2:32 PM