Everyone knows I have an obsession with the supernatural.  Due to an overwhelming neck fetish that I have had since I first saw the love scene in Top Gun when I was 13, those supernatural characters that put emphasis on the neck have an unbelievable appeal for me.  Mainly I'm looking at vampires and werewolves (they tend to have neck fetishes too).  Every once in a while though I find my needs gravitate to a good old fashioned western....romance that is.

There's just something about a cowboy working a ranch, riding the range, having sex on the back of a horse (apparently it happens...quite a bit although I don't see how that works but hey it's fiction).  I find that taking a break from vampires and werewolves is refreshing as long as the men I switch to are just as strong and commanding.

I still don't go for those simpering stories where the woman is helpless and is in need of her man to protect her.  I just can't stand it when I watch a movie or read a book and all the heroine does is scream for the guy!  Hasn't anyone ever heard of pepper spray?

That being said I found a great book series when looking for a good cowboy, old west romance.  The Hell's Eight series by Sarah McCarty is an excellent read.  Understand that it can be pretty graphic during the love scenes.  Surprisingly though it's done very tastefully.  The dialogue is well written and the sex in the book although may seem over the top in language really fits in with the feel of the book.  It wouldn't be believable if they made the scenes fluffy or God forbid Twilight-ish ("she walked out  into the water ... " next day... gah can you say frustrating?).

The thing I like most about this series is it's very similar to J.R. Ward's Black Dagger Brotherhood series (without the vampires) in that it introduces you to many different characters all at once and you find you need to keep reading the series to see what happens to those secondary characters.  I have to say I LOVE this in a series.  J.R. Ward does this incredibly well!

The first book in the series is Caine's Reckoning and it not only introduces you to Caine and his love interest Desi but it also introduces you to the other men of Hell's Eight: Sam, Tucker (my most personal favorite... HOT!!!), Tracker, and Shadow.  These are the ones that have books but there is mention of others.  I'll assume that eventually there will be eight.

The books are set in 1858 in the Texas Territory.  There's not just sex (although this is some pretty heart pounding ... pun intended... stuff), but there are scheming evil men out to steal an inheritance, Comancheros, nasty Mexican war lords and lots of action.  Sarah McCarty provides really great description of the area and what it must have been like to live on Hell's Eight land.  I'm not usually one who likes a lot of description rather I prefer more witty dialogue, but her ability to create a picture of what the characters are seeing and experiencing is top notch.

If you like really hot, rugged, protective men who can ride, shoot and have the most talented hands... and mouths this side of the Mississippi I can't recommend this book series more.  And if that doesn't convince you take a look at Tucker's Claim cover photo and tell me that you CAN'T judge a book by it's cover... 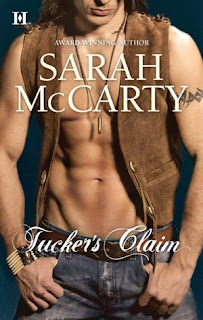 Posted by LRArconati at 7:30 PM